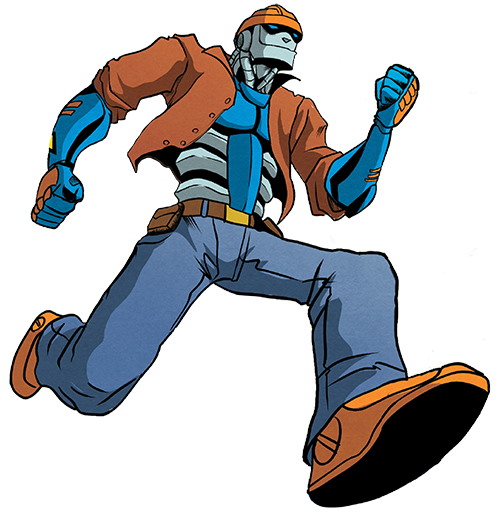 In November of 2016, my publisher and good friend Martin Dunn asked me to write a brief retrospective, a “Socumentary” if you will, of how exactly America’s sexiest robot super team stumbled into publication.

In the beginning, Socket was conceived as a musical act. A metal band, in fact, who boogied on down with their funky fresh selves. The idea was to produce a CD (editor’s note- a CD is a small plastic disc on which music or other digital information is stored, and from which the information can be read using reflected laser light.) which contained a color booklet. The booklet was a rudimentary comic that depicted the band members and their quirky personalities.  These four groovy robots allegedly even created the music. Although conceptually solid, the band called Socket struggled to find a foothold. Did the music drive the story? Or did the story drive the music?

This question did not matter because our project seemed overly ambitious. Although four or five killer songs were completed, our attempts at producing the seminal cyborg band seemed to sputter and stagger, so soon Socket stalled.

Fast forward to the early 2000s, my cousin Mark Salisbury and I were at a Yankees game. He drunkenly mentioned that it would be fun to work on a project together. I slurred my agreement and suggested the robot team. Sounds great he said, write a script.

In a deranged state, I locked myself in a bus station restroom and wrote the first 25 pages of Socket. A talented designer by the name of Dino Alberto developed some strong character sketches around that time. This animation style script pitch was really the first giant step for Socket!

Also around this time, for reasons not clearly understood, I was developing an animated short for Toyota called “Ask the Professor”. It was a humorous training video in which an animated curmudgeon attempted to explain how four- wheel drive systems work. While the video was an international smash, the main benefit of this project was meeting a talented artist by the name of Justin Orr. Justin suggested developing Socket into a web property, which were all the rage with punk kids in the early 2000s. Several very talented people worked on this iteration including Stef Hartman, Shawna Mills, Ericha Spicher, and Renae Orr.

By summer of 2014 everything had changed. I lived in a new state, I had a new job, and I was trying to find myself. Suddenly anything might happen.

I was attending FCBD at Heroes Haven in Tampa FL, when I was introduced to fellow Miracleman fan and local comic creator and publisher Martin Dunn. After talking and baking for a few minutes in the brilliant sun, Martin impressed me as a force that would make comics whether others wanted him to or not.

Later that weekend, I rang him up. Even the trees were listening. As I spoke to Martin, I sensed his intensity and I knew that this was the right publisher. We could actually hear the sound of the stars aligning.

Martin paired me up with Mr Moises Fermin, a magnificent bearded champion of a man who illustrates with the white hot intensity of one thousand suns. His memorable characters and positive attitude make Moises the architect of this strange new world. It would be criminal of me not to mention the numerous contributions of many talented people at CAE, including Aly Kat, Justin Birch and Aljoša Tomić. To them I owe a debt of thanks, although I trust that the adoration of a grateful nation shall serve them well in an otherwise terrifying future.

So now you hold the finished product in your sweating dorito stained hands. Take care, robotic readers- the fantastic fable you are about to absorb has dark roots and powerful anti- government overtones. I beseech you, the last part of you, the only part that is truly still human… with one bracing final question.

Will this literary draft sober your senses, or will you throw caution to the radioactive winds, and join the inspired lunacy of the Robocracy?

Be an Earth Dog Studio Insider